There's a blog - or site - Dress a Day
And in my stupidity I actually thought that was a sewing blog where the owner sews a dress a day for some time... like a month or a year or so. Nah. I really don't know what that is all about... I suppose in its previous incarnation it at least meant to post a dress every day for some certain period of time, but I don't know if that ever happened... they have kind of made the old site link to the new site, so that all the links to the old site lead to nowhere... :-( Which is very upsetting and tiresome and bothersome, so I lost interest.
But - the idea stayed.

So, I'm going to sew a dress a day for a year.
Or not. I don't think I can continue doing that for 365 days! And what would I do with 365 dresses?
Maybe a dress every day for a month? That I could do. I wouldn't mind having 30 summer dresses :-D
So - a dress a day sewing challenge during June 2020.

I will be making the things from these two boards and then delete the boards, so if you see anything you like, pin it for yourself.
- Sewing Clothes; Dresses
- Summer dresses

There is a huge problem with this project, and that is that I have a limited amount of materials... I can't just decide to sew something, go and buy the materials, patterns, notions and such needed to sew it, I have to use what I have and only buy the absolute necessary...

So - I have to adjust my projects to the materials.

I am planning on using a lot of my stash, make new from old clothes, and other such things... I could buy some used clothes to make new things of them. I have some old sheets and such, which will make a couple of dresses, I assume.

Diane von Furstenberg wrap dress. I have wanted one for a couple of years. 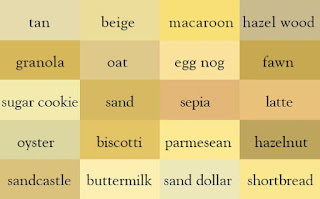 I have a couple of dresses that are too small or not quite as I'd like them, for example one absolutely lovely flower dress, but it doesn't have sleeves, and - being a fat, old woman, I want sleeves. I also have one "singoalla" dress (peasant, gypsy, or something like that) but it doesn't have enough room for my boobs. Also, I have the dress I was wearing when I met my husband-to-be, and I'd like to have that in my size... it was 40 kilos ago ;-)
Also, I'd love to remake the jumpsuit I had that time... I loved it, but it was... that... beige-ish what ever color... oat? and it really doesn't fit me at all :-D I know it's not a dress, but does it really matter that much? I mean, it's the same kind of sewing, one just have to make pants instead of a skirt, and as it's palazzo pants, it looks kind of the same as a dress...
Now, this isn't quite like it, but it had the same kind of fitted bodice, short cap sleeves, wide legs and slightly raised waist - to my natural waist, which is high. Not quite empire line. It had open neckline, slightly v-d - not quite as generous as this one :-D Also, it had a back zipper, no buttons. It was soft viscose and I loved it.
but - this one comes very close :-D 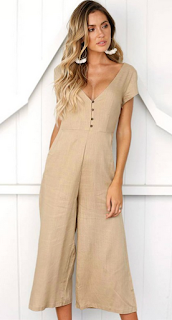 Posted by Ketutar at 9:53 AM No comments: 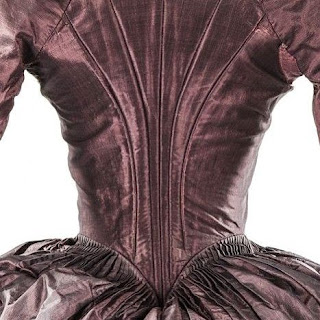 So, on Thursday I saw someone had posted a photo of the back of a 18th century dress, and someone else commented with "How many people working and hours worked might have been spent on a dress like this?", and the poster responded with:"If you’re just talking about the sewing, there are costumers who have handsewn ones like this in just two days."
Handsewn in just two days!? Sounds like a challenge to me :-D

So... I am about to sew a 18th century dress in just two days.
I am glad about the fact that that is only the sewing. Not pattern drafting, getting the materials, making the foundation layers or any other of this stuff, because it was a lot longer than two days ago :-D (It's Tuesday today).

Also, I have never sewn a 18th century dress before. Or worn one. So this is total virgin ground here :-D

I'm really good at sewing for hand, though, and not averse to drafting and other such things.
Also, I have already dabbled with corsets. (You might remember my 1911 corset sew-along I was supposed to do... I haven't done anything about it since that time... there were some things happening in my life and home that has made it very difficult to sew anything, and all my projects has been packed away, and now I don't even know where they are... And I am very unhappy about it. :-()

So - I have been doing some research... Here's my Pinterest board about this project. (Yes, I know, I hate Pinterest and need to leave it. But not quite yet... I'm working on it.)

I'm going to make myself a robe a l'anglaise retroussée, with a tight fitting bodice and an overskirt that is going to be worn "a la polonaise" (and as I was taught, just because one puffs up the skirt, it doesn't make the dress "polonaise", because robe a la polonaise has a different bodice, and I don't like that bodice. I want it flowery, and if I can't find fabric that pleases me, I'll either paint it or embroider it. Both options please me :-D (Yes, I know, I'm mad. Especially if I plan on embroidering a 18th century dress... it will take a bit longer than two days. Even though I'm fast :-D)

I will be making myself
- a shift
- stockings (yes, knitted, because they knitted stocking already in the 18th century)
- garters
- shoes (I have been thinking about actually making them, carving the heel from wood and making them of leather and brocade, but I think I'll just buy a new pair and rehash them to play the part. It's not going to be historically accurate anyway...)
- petticoats - I am thinking about one with a flounce and one quilted... if I'm going to wear it in the summer, the quilted might be too much, but I have worn a Viking carb made with wool during the summer as well, so i think I'll manage a quilted petticoat. After all, there isn't much on top, and there will be wide brimmed hat, fan and parasol. I think I'll manage. It looks pretty. Also, it works as insulation :-D
- stays
- pockets
- bum roll (yeah... they didn't use panniers much in the 1770, but they had a "fake bum" :-D
- fichu
- engageantes (sleeve ruffles)
- bows
- cap
- hat
- I will use my fan and parasol I have already
- hair - I need to get some things for my hair. A bit of fake hair, to begin with, because my hair isn't long enough. And I need the "rat" :-D

Anyway, today I printed out a corset pattern. Or stays, actually. I don't know what's the difference, and I really don't care either. The pattern is size 8. I'm size 24.
Also, there are no instructions...
I thought the pattern would be a good starting point, but now I'm starting to wonder...
I added 8 cm to each pattern and redraw the edge line... I'll need to "rebone" them, too, (re-draw the boning channel lines) but that's a minor problem. I think that can be done without drawing them, and just sewing lines with a certain distance.
I will also need to add the flaps around the edge. After all, this is a 17th century corset and I'm making an 18th century corset.
I need to get the pattern right, though, first, and for that purpose the flaps and bones aren't necessary. I need to get it wide enough for me, and tight enough (considering I added too much width to the 1911 corset), enough gap between edges for lacing (and there's lacing front and back... I don't know if I'll have that or not... it would make fitting easier), the breast high enough and wide enough for my breasts, the armscyes big enough but not too big, the hip hole high enough...

And then I just do what she did:

Dress made from handkerchiefs 1881 from Peterson's magazine

"We give, here, a new design for making up a Madras costume, either of wool or gingham.
These handkerchief-boarder goods come in fine wool and cottons, either woven in squares, with border all round, or with the border on one or both edges of the plain cloth; or the plaid. Bayadere stripes, or brocaded goods can be bought by the yard, and put on as a border. The Bayadere stripes are the newest thing out, in the way of combination trimming.

Our model here is of fine wool, with handkerchief-border.

The round skirt is trimmed with a side, or as it is often called, a kilt-plaiting, half the width of the goods, which is a yard wide. Allow three times the fullness for the plaiting.
A very narrow skirt is required; but little over two yards in width for the foundation. And to this the plaiting is arranged.
Two handkerchiefs are then disposed of, forming a pointed tunic, which is fastened in front with a knotted end at the knee, as seen in the illustration.
The back is formed of two more handkerchiefs, with the fullness placed in irregular poufs.
The long basque-bodice is gathered to the fronts, at the neck and waist, the border of the handkerchiefs forming the hem for buttons and buttonholes, and also making the turned-back revers.
The back of the basque is looped up en panier.
Handkerchief fichu, knotted at the throat.
Coat sleeves, with pointed cuffs of the border.
From ten to twelve handkerchiefs will be required, with plain material enough to make the foundation of the skirt which must match in color and quality as near as possible.

These wool handkerchiefs cost from fifty cents to one dollar and a –half apiece.
The cotton or Madras ones from thirty-five cents to fifty cents each."
Posted by Ketutar at 6:57 PM No comments:

Some pattern links and useful information

Some Pinterest boards with old patterns:
Lone Madsen's board
María Jesús Collados Martín-Posadillo's board
Melody Mann's board
Marjorie Porter's board
Amanda Chaik Range's board
Dorothy Powell's board (mostly doll stuff)
June Dolly's board
Susan Rogers's board
Deana Tollerton's board
Tenn Flamingo's board
Molly Weiss' board
Posted by Ketutar at 6:29 AM No comments:

Posted by Ketutar at 5:52 AM No comments: