I went to Instructables to see the results of the Halloween contest... you know, the one where only the USonians can win... It doesn't matter that the legal problems are limited only to prizes and the crafters care more about the honor than the material stuff, no. The thing is that there's plenty of ways to get around the legal problems, especially when the contest goes on a whole year. But - who cares. 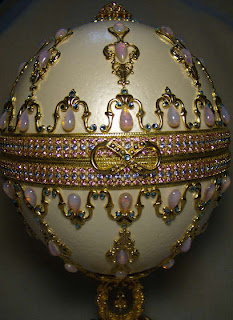 Anyway, I noticed the Fabergé egg roundup. This is the winning egg...

Er... THIS is her inspiration: 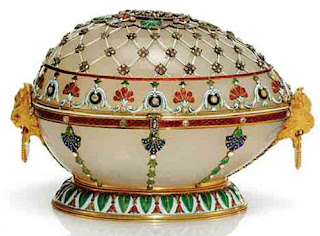 The Renaissance Egg from Easter 1894, by Michael Perchin, Fabergé


I look at the other eggs... people have been carving eggs, different sizes of eggs to fit into each other like the Russian doll, creating tiny doors that open to reveal other wonders, covering eggs with beads one after another to create intriguate patterns, people have created miniature railroads and landscapes inside eggs... and THIS wins?! (This egg can be opened and there's a silk lining. Yeah...)

I'm sure it is done with all the desirable quality and so, but this lady is a GRAND MASTER of egg art, competing against people who might be trying the technique first time in their lives...
Her egg is BORING! I don't care that she "had to" find 75 opals of the exact right tone. I don't care that she spend money on cabochon opals. I don't care if she's a gold smith and by herself created every piece of the gold filigree she used on the egg (as far as I know she isn't. I wonder if there's ready-made golden hinges for ostrich eggs one can use... 5 minutes later: yes, there is... What there is not is a hinge for a laying egg though >:->).
The egg is boring and she, as a Grand Master of Egg Art, is to be expected more. She has been a Grand Master for four years, competing with eggs for 10 years, teaching and judging... I'm just... Well. I expect more. I'm disappointed.

(Yes, it is beautiful, but I expect more of a Grand Master in Egg Arts.)

To become a Grand Master you have to get the master's degree in all 9 categories of egg art: Beaded and Jeweled; Decoupage; Diorama; Filigree; Hand Painted; Batik Folk Art (Pysanky); Relief (Paper tole or Bas-relief/repousse); Scratch-Carved and Sculptured or Engraved

The master's degree qualifications are interesting, I think.
http://www.eggartguild.org/masters.htm

Now, look around at egg art guild and see what other masters are doing...