I haven't been writing much to this blog lately. I have been recovering from a very bad heartache, but now I'm better, and getting interested in things again. So - hopefully I will be updating my blog a bit more often.

Yes, I'm talking about Pinterest. I went, saw and was hooked, and have been pinning since then. It's more addictive than Polyvore, and I was there like 24/7... But - Pinterest. Someone said it's like getting a new idea DIY magazine filled with the best ideas EVERY DAY.

It was at Pinterest I found the corset making challenge.
No, I haven't got any longer with it, because we were supposed to move, and everything was packed down, and then we were not supposed to move, but it still isn't clear, so nothing has been packed up... and we have been living in boxes for some three months now, and I hate my husband, just a little, right now...
And myself. I could make the decision just as well as he, and want to make it just as little as he does, so none of us makes the decision... and we keep living in boxes.

Well, Ostara is coming closer, and there are things I want to do.

The same thing every year, every Sabbath. And, funnily, somehow it's all done when the day arrives.
Though, "all" means like 1/4 of all the grandiose plans I had. ;-)

I want to make a December Daily. I love Ali Edward's idea, and I would like to make one for Ostara. March Daily? Spring Daily?

I am still envious to all those "Project Life" gals with their fancy schmancy scrapbooking and cardmaking thingies, pretty papers, stamps, washi tape and gadgets.
Sure, I can paint and draw and design my own stamps and papers and patterns and everything. I know how to make washi tape with my own pattern, and all... but it's all the same! Everything will have my mark on it, just as clearly as if I had stamped my logo on everything.
And I don't like it.
I would like to not need to.
I wish I was rich and lived in USA in a city with a shop with everything I can imagine to want in it.
No, I don't.
Or, I do wish I was rich, but then I would get all I can imagine to want from internet :-D

I need to learn to use my lovely, beautiful, new camera. :-) 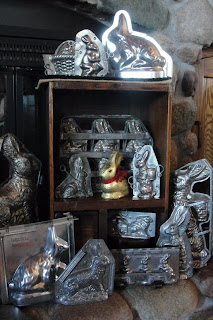 I wish I had some vintage chocolate bunny molds... I wonder how those are made... I think there should be some sort of original, on which you press the tin against, to create the mold...
I wonder what material the original is... Metal? Clay? Wood?
I wonder if one can soften hard plastic with hairdryer so that it can be forced to become a mold...
(Huh... apparently you can. Make the original of clay and transfer to plaster. Make the clay original as whole, and take the plaster copies in halves. And think about the details. They should be quite shallow and open, so that you'll get the plastic off the plaster and the chocolate off the plastic, whole and nice. But, yes, you can make your own chocolate molds.)

A couple of years ago I had planned my Ostara very well, to the last corner of our home. And I really mean "last corner". It went so far I had planned on making Ostara wrapping paper to give the cook books an Ostara covers, so that they'd match the rest of the kitchen...
Yes.
Mad.
MUAHAHAHAHHAHAHAHAAA!!!!

Oh, and then I need to think about the countdown calendar...
Now, that's something I REALLY should have thought earlier, as I planned on MAKING the fillers...

Oh, and I want this couple as my Ostara "elves on the shelf"... 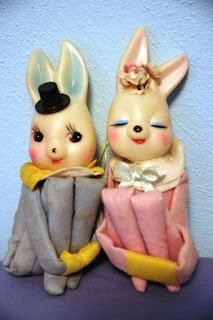