"Funny" Response For A Handcrafted Gift 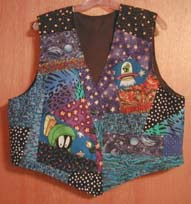 "I did a crazy patchwork vest for my 4-year-old niece, painstakingly decorated and added embroideries to appeal, and buttons and beads. It took me weeks: my sister-in-law offered me $4 as payment 'as scraps were only used.'

My very first lap quilt that I made was done with 12 blocks different patterns--all done by hand--I was very proud of it and gave it to my mother-in-law: she used it as the dogs blanket.

I gave my father in law a decoupaged, papier-mache book box for his bible with angels and clouds, gold embellishments, and sayings: he thanked my 6-year-old for the lovely box he made!
Just one more: they call my house 'the fire trap' because of my collections for crafting!"
-- Julie

Er... What a horrible family she married herself into! 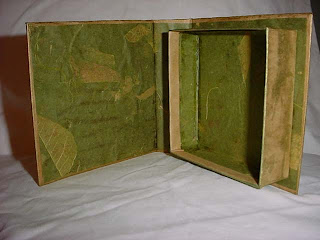 "As scraps were only used"...
Firstly, I don't think any payment would have been necessary, but if the SIL had asked her to do the vest against payment, then it's another issue.
Secondly, this story reminds me of the sock story I heard during Socktober 2006...
A woman was knitting socks in public and some stranger came by and admired the socks. She wanted her to knit her a pair as well. The knitter asked if it was ok with... let's say 10 dollars wage for one hour's work, and the lady thought it was ok. Then the knitter tells the lady that in that case the socks - yarn and work - would cost her over 100 dollars...
(Or something like that. I don't quite remember the story, but this is the spirit of it.)
So - the MATERIALS for the vest didn't probably cost too much - even though the embellishment, embroidery threads etc. cost more than I like - but the WORK put in it was way more than "scraps"...

I really don't like people who see the crafts as just pottering and worth nothing... Of course, it's rather effortless to me, but I have several years of education and a natural talent for crafting. Somehow it's especially people born with a thumb in the middle of their hand, people who couldn't knit a sock or sew a button to save their lives, who has the least appreciation and understanding of the value of crafting.

About the MIL's blanket - perhaps she loves the dog more than her children, and therefore giving the quilt to the dog was giving it a very honorable and high place in the family... One never knows.

About FIL's Bible box - Quite a compliment to the 6-years-old... and perhaps he appreciates and uses it because he thinks it's made by his grandchild ;-)

But... I'm 100% sure of that the box did NOT look like made by a child...
And as the family "lovingly" refers to their DIL/SIL's house as "fire trap", they KNOW she does things like that... It wouldn't take a lot of intelligence and ability to draw conclusions to KNOW that the box was made by the MOTHER of the 6-year-old, and not the child. Considering that... What a f-ing insult to say to a crafter that her work is child's play, unskillfully done, looks like something kids do in kindergarten... *brr*

"My friend Nancy is a masterful and prolific quilter. She created a beautiful baby quilt for a friend. When she presented this wonderful gift to her friend, the mother-in-law said the quilt was so beautiful Nancy couldn't possibly have made it."
-- Anne

P.S. As I was checking out the other Interweave Press magazines, I found this: "Monk's Belt"
That I can do too with my little children's play loom :-) Looks very nice, I think :-)
Posted by Ketutar at 2:39 PM 3 comments: 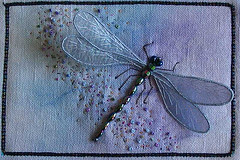 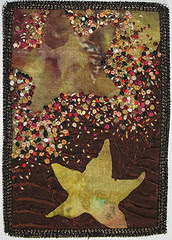 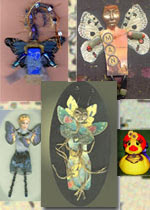 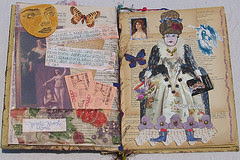 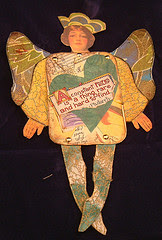 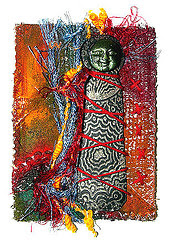 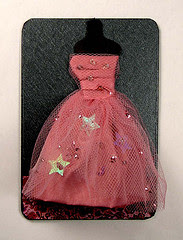 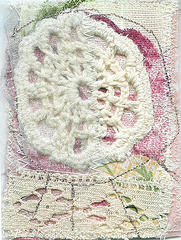 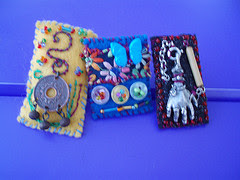 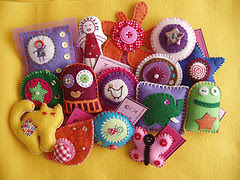 Here's some nice buttons
and here Bunch of Brooches 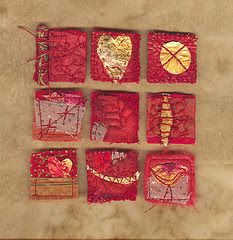 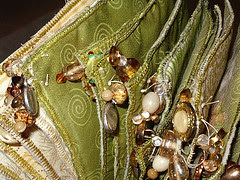 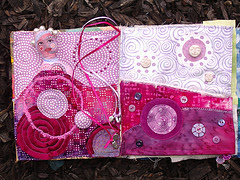 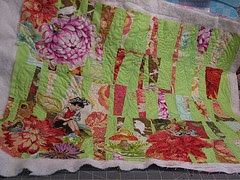 A fiber art trading book is a fabric book - a book made of fabric. Here too there are no limits. Some make the whole book of fabric, like children's picture books, some make an altered book, covering an existing book with fabric art blocks.
(You can make it a "Decorative friendship book")

A doll quilt is exactly what it says - a miniature quilt, doll size. So - it too can alter in size from ATC size to baby quilt size. The doll quilts are usually very traditional pieced quilts, but the fabric artists are getting into this area of fiber crafts as well.

I think this is very exciting and inspiring... Now if I only could stop procrastinating and get some done :-D
Posted by Ketutar at 11:33 AM 2 comments: 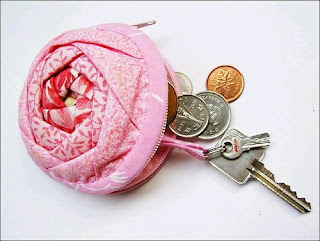 Another great stocking stuffer :-)
(Yes, put in a couple of coins... everyone appreciates it LOL) Feathers and Fans, Waves and Shells rabbit tracks
Originally uploaded by ketutar
You could easily knit a pretty scarf as a stocking filler :-)

This "Feathers and Fans" lace pattern is easy and quick, and a good way to learn to knit lace.

"how to"?
feather and fan lace

Here's the "rabbit tracks" I made for a swap pal a year (or two) ago - I think it looks like cat paw marks :-)

Very pretty scarf
Misty Garden scarf
"Old Fashioned Shell Tidy"
Wave and Shell shawl
Knitpicks has a "Shadows" scarf - it might be a little problematic to get to the pattern though... Go through "patterns - scarfs" (You will find other nice patterns as well ;-))
Feather and Fan baby blanket - just make it narrow enough
Feather and Fan lace scarf
Posted by Ketutar at 1:18 PM No comments:

This month's theme in "Month of Softies" is "The Place Where I Live".
"This can be as broad or as narrow as you like, from the favorite room in your house, to the universe itself. What can you create in softie form that would represent this place?" 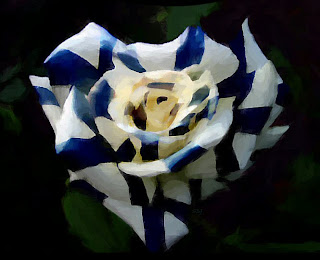 And the colors for the current Color*iffic swap are red, blue and yellow. Yuk.

There's some interesting swaps going on, but I'm going to be strong. No more swaps for me.

I found something today... Hall of Shrones. These people sound all like interesting people :-) Yeah, I want to be just like that, when I'm... er... well... some day :-D
But it is an interesting goal though... how to be a dirty old grand dame?

I also found something else... LibraryThing... where you can catalogue your books... I have been doing that the last couple of days and so far I have listed about 600 books... and still about half undone... My hubby and I estimated our common library to be about 1500 volumes. We love books :-)
Posted by Ketutar at 6:34 PM 1 comment:

Now I have taken pictures... 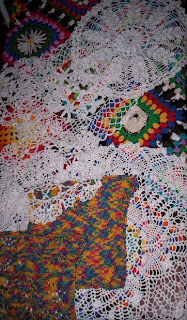 but OF COURSE I can't find the cord that's needed between the camera and computer... *sigh*

I have my butterfly curtain, 6 doilies, 2 dishcloths and baby bear's blankie, but - no photo evidence ;-)

10 minutes later... I decided to make the last effort to find the bloody cord, crawled under the table and - guess what... it was jammed between the table leg and drawer and hidden behind a box of paper... So I found it.
And here's the photo evidence LOL

On the left, on
Baby Bear's Blankie (made with plain granny squares, bear squares and daisy squares and colorful cotton)
DW cloth and Danielle Côté's Victoria cloth;
double pineapple doily; texas star doily; Nancy Hearn's White Doily; Flower Posy doily and Wisteria doily - and then one I don't remember name of... I doubt I have the pattern saved either... Anyway, that's what I have been doing this summer :-)

Below the butterfly curtain (Yes, I know it's too short... I am going to sew it on a piece of cloth, so that it hangs over the window and can be seen properly - and so that the star sun catchers can be fastened on the cloth instead of the lace... Perhaps I should just add a longer string and hang them from the curtain rail... Stupid me... abusing pretty lace... :-( ) 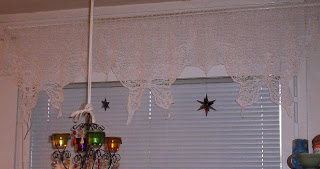 Posted by Ketutar at 8:38 PM No comments: 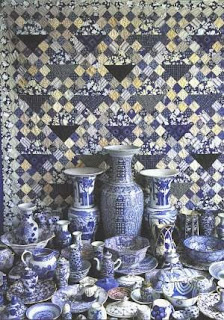 I am so envious to Kaffe Fassett... this is pure, vicious, poisonous envy I'm having... Nothing good in this.

Kaffe is an American mediocre artist living in UK, and everyone knows who he is... because he did what women have been doing for centuries, but he's a guy, he's exotic (American in Europe) and his color sense is... something I - or anyone else - have never met before. I suppose it's that women during the centuries have always been too careful, too aware of the rules, had too good taste and eye for color... and I suppose that's the reason why I'm so envious. It feels like he not only got away from breaking all the rules and making kitsch desirable, he got famous and rich with it too... it's like rewarding men for what women have been punished for doing... I don't think he deserves all this.

Another whom I don't think deserves what he's got is Dan Brown. He isn't a good writer, his ideas are not his own... I feel I could write a better book any day... why haven't I?

Holy Grail, Holy Gruel and Holy Smoke, felted by Debbie New
And that - I assume - is the real reason to my envy. I haven't done it. If I had, I wouldn't envy.
Posted by Ketutar at 12:18 PM 2 comments: