I visited all over 900 blogs, participated in about 60 draws and won - nothing.
Yes, I'm disappointed and sad about this fact. *sigh* 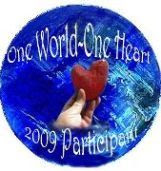 One World - One Heart happening

I am to give a gift to someone visiting my blog and leaving a comment. You can live anywhere in the world, be anyone, if you'd like to receive a package from me, leave a comment.

I don't know yet what will be in the package... at least some warm socks, as last year, but perhaps something else too... Let's see what I will manage to create during these 3 weeks to the day of the lottery. I will be updating this blog entry, so that you'll be able to see what you will win.

Update 1. I went through my things and found a small paper giftback, pink, with silver dots; a tiny notepad with the same pink silverdot paper cover; a small stamp with pink inkpad and a pair of very Swedish cookie cutters in shape of Dalahorse, one small and one big, and I intend to bake you a batch of cookies using my cutters in the same shape :-)
I'll add pictures tomorrow. It's almost midnight here now, a bit too late to do anything about it now. 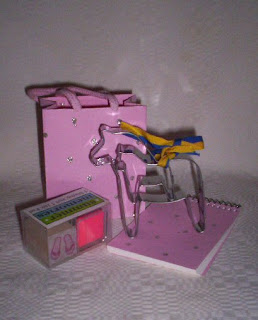 You may enter the draw until 11th of February, midnight CET - that is Central European Time.
I will draw the winner February 12th and post the package the very day with Swedish Valentine's stamps :-D

Comment on 30th January:
Thank you for all the comments :-) It's really lovely to read what you have to say :-)
I have sent cookies to USA, and it takes about a week to arrive, and the cookies have been fine, so I think the cookies can be sent all over the world without getting bad.
I also don't think the customs will stop the package. At least I hope so. Last time I sent cookies was last year, so if nothing special has happened since then, they should arrive.

The socks are finished and I will be posting a picture soon... or maybe not ;-) That could well be a surprise :-D At least they are pink, wool, with hearts and about European size 40 - It shouldn't be a problem to remove a couple of rows from the foot to make it fit a smaller foot, or you can use other socks inside :-D The yarn is old, from my stash, and I don't know anything about it - except that it is wool. It might be dyed by me, it might have some man-made fiber in to strengthen the sock. I wouldn't wash them in a washing machine except in a wool wash program, but you can always see what happens... If they shrink a lot, you get a pair for a girl, or perhaps Yule ornaments :-D

And the winner is... 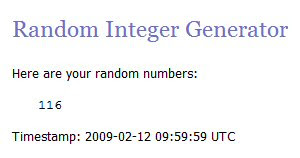 In Finnish "hamster" is someone who collects or "hamsters" things, "for the rainy day". You are not a hamster, if you collect stamps or vintage dolls, but if you collect things to be used later, "just in case", like for example canned food, because one never knows when one might need it, or craft material, because there was a sale and, well, one can use them some day for some project. Yarn hamsters are naturally people who have been "hamstering" yarn, either there's been some yarn over from a project, or one planned on doing a project that never happened, or... there was a sale in the local yarn shop and one could get really nice yarn, a lot, cheaply, and even though there wasn't an immediate need for the yarn, one never knows, and you get the picture :-D
Anyways, the Finnish knitters' blogging society organizes "yarn hamsters" February, now for the 5th time. The one who manages to use most yarn without buying any new yarn wins a prize. (Or something like that. Close enough to me.)
I think I'm going to join, as in a training month, or so. Let's see if I can manage to diminish my yarn stash a little.

I also "hamster" patterns... I have like 10 kilos of print-outs and books and ideas and plans I need to do. There's another thing going on about this in the net too. I don't remember what it was right now, but I think the idea was to finish 10 patterns from stash before one gets to buy a new one - magazines and books counted.
Alan Dart has put the lovely Siamese on his site... the Leprachaun isn't bad either. I really want the Hanukkah Hiram and the Witch and Cat too, and... The problem is that I already have four patterns by Alan Dart waiting to be finished... the Springer Spaniel, Pearl the Knitter, Devilish Dragon and the Yule gnomes.

But I have finished my cardigan. I am knitting my spider scarf, but I didn't have enough yarn for the whole thing, and now I have to decide what to do with the rest... perhaps just use some yarn that fits, somewhat, and dye the whole thing black. It's wool, and disgusting color, and black would be nice, because the thing cannot be used as a scarf, but only as a Halloween decoration. Or then I give it to my niece, who doesn't like the ugly brownish spider color anyway, but would prefer black.

I also need to finish my Horseshoes cardigan and Mapleleaves socks. I want to knit more shawls. I have Luminaria pattern waiting, because I'm really interested in Estonian lace knitting, and the Spring Equinox Shawl.

I found this delightful little society :-)

http://thetoysociety.blogspot.com/
The Toy Society at Flickr
The Toy Society at Facebook
"The Toy Society is a small project spreading the love throughout the streets. Nothing to it really just a bunch of handmade toys looking for a nice home. What started as a small street art project in Australia is slowly spreading around the world." "So, you'd like to be part of The Toy Society? Maybe make a toy, leave it somewhere...you know make someone happy. Sure, everyone's welcome!"

Give away some joy to people :-) I think I'm going to crochet another cat for someone to be found :-)

I just wanted to leave something small inside a book in a library for someone to find, like a bookmark or a picture or scrap or something :-) I love it when I find things like that inside books :-)
I also thought of bottle post, and binding something on a helium balloon and let it fly somewhere...
Posted by Ketutar at 3:57 PM No comments:

I was just going through my blog, to collect some of the ideas I've got and presented in this blog, and found this: 2007 projects

"It's totally impossible for me to have time to do everything I want to do - especially when I keep surfing online most of the time - Especially when I just get more ideas to do..."
Posted by Ketutar at 10:29 PM No comments:

I finally managed to write my 101 things in 1001 days list. It's mostly about things I wish I had done, not about things I think I should or so. It's quite possible I have been overestimating my time and possibilities, but on the other hand this is not something I MUST do, it can just as well be used to see what I actually am prepared to do and what I actually manage to do. Some kind of a reality check.

Anyway, there's a couple of points on the list I'm doing right now.
78. I want to become a better blog pal - visit at least 10 blogs every week of which at least 2 new, and leave comments.
I like comments on my blog :-)

91. I want to "click for free" every day.
Care2 has free clicks, then there's the breast cancer site with other clicks and free rice...

1. February started "a thing a day" anew.
2. There I spot "cold weather woman" and les plus beauxx
A thing a day reminds me of the fact that I want to start drawing again, making art... and that I really would like to become more active with art journaling. Which leads us to
3. Michelle Ward's Green Pepper Press Street Team Crusades.
I have been really bad girl. And not in a good way. But - as long as there's life, there's hope :-) Last year I managed to create an altered book - sort of - because of "changing to do into - ta da - today". I also managed to finish quite a lot of craft projects last year. Not bad.
But I needed to visit a blog entry of mine to find Michelle's crusades, and I spotted
4. iHanna. I actually visited her blog yesterday, because I was bored and tried to procrastinate, and not do things on my list... What is it with lists, anyway? I write a list with things I really, REALLY, want to do, and when they get on the list, I'd rather do anything else but the things on the list. *hmm*
To her blog I got from
5. Gingerbread Snowflakes. It's one of my favorites, and I love the blog list there.
6. One Pretty Thing is really nice... What was the word... enabler?
7. Polliwog's Cakewalk - sounds like my kind of girl :-)
8. which reminded me of Cake Wrecks... I was surfing yesterday and found this blog, and laughed so that I cried :-D Especially the Kwanzaa entry... which lead me to
9. Ultra Fine Flair...

Then... I visited a lot of other blogs, but there just wasn't anything that caught my eye... So go and visit "What Not to Knit". It is still wonderful :-)

P.S. Viva Woman has a "bejeweled giveaway" right now. She could have joined OWOH too, I'm sure she'd had a lot more attention that way :-D
Posted by Ketutar at 3:22 PM No comments: 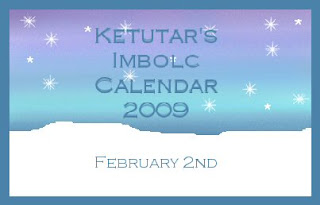 It's monday, 2nd of February, and Imbolc. We made an early start and have celebrated the whole weekend :-D I have gained like 5 pounds or so... :-(

On Wednesday is Runeberg's day. There's a certain type of pastry that should be made to celebrate that day. Johan Ludwig Runeberg is Finland's national poet, lived some couple hundred years ago and his favorite pastry, they say, was a sort of a "clean the tables" cake - with bread and cookie crumbs in dough. It is really good, but I am not going to bake those this year.

On four days is mister's and mine 10th wedding anniversary... I can't believe we've been married in 10 years! I hope we'll get a day off, just him and me. :-)

There's other stuff happening in February too, that would be a cause to eat carbs... birthdays, Valentine's, Mardi Gras... But I am going to be strong!

But here's a pair of love birds

a wonderful "100 things I love about you"

and an all edible candy box to those who will eat candy :-)

And happy Imbolc to you :-) May the spring be bright and light and may your seeds grow :-D
Posted by Ketutar at 2:55 PM No comments: 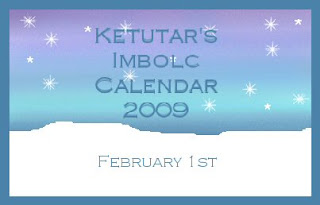 sugar shacks - or igloos
Posted by Ketutar at 10:01 AM No comments: