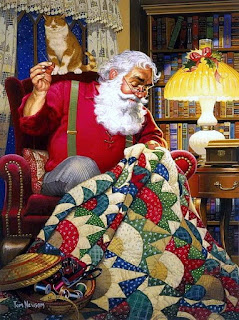 Here's one version: Victoriana Quilting; Santa's Rising Sun
It is a very good version, made by a real quilter, with very good instructions. But... it's not quite right.

So, here's my version:
Take a square piece of paper, the size you want your quilt patches to be.
Fold it in two and then in two to the other direction, so you have divided the paper into four quarters. Mark the lines.
Draw a circle through the midpoint.
Fold the quarter inside the circle into four quarters, and draw another circle through the midpoint of that quarter.
Now, draw a line through the paper from corner to corner. This line should tangent the bigger circle at the midpoint.
Draw 2 lines, from a corner to the midpoint of the paper, to get the biggest star point.
Now, draw a line from the other two midpoints to where the bigger circle ends on the end of the paper. 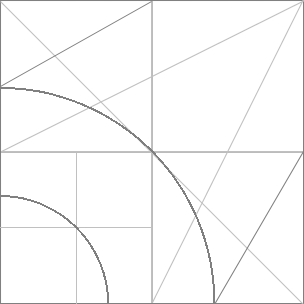 Now, you should join the inner points of the star with the circles middle, as Tom's patchwork is quilted. Perhaps you should just print this image as big as you want your quilt square to be and paperpiece it :-D
The circle's size is not important here! Use any plate, dish, box, what ever you have about the right size. Cut two circles and then cut them into four pieces, and mix the fabrics for different squares. 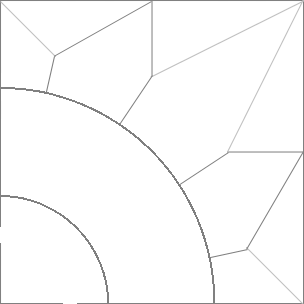 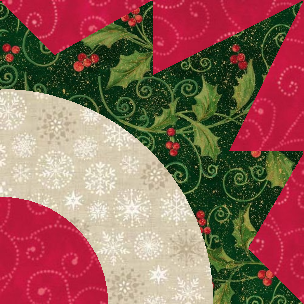 Here's the Rising Sunburst, which to me looks exactly right :-D - As you can see, this isn't divided into four, like Victoriana's and mine is. All the star points are 30 degrees, and I think the smaller circle is 1/3 and the bigger circle 2/3 of the square... 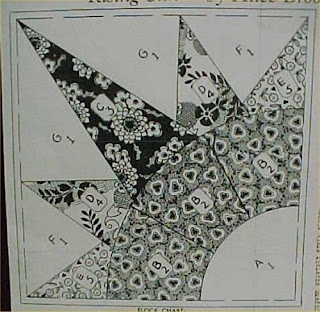 And this is the Rising Sun from Solomon's Puzzle Sampler Quilt
As you can see, the "plates" could be made of several sections, and you can have more than just two circles, to add interest :-) 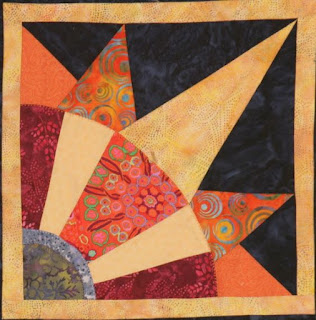 Posted by Ketutar at 9:05 PM No comments: