I have arrived to the point in my life when the existing patterns are not enough.
It's like with writing, if the book you want to read doesn't exist, you must write it - if the pattern I want to use in my craft doesn't exist, I must design it.

I have got a very good fiber craft education, and design was part of that. I know how to design.
My designs might not be the best in the world, but it really doesn't matter much what the rest of the world thinks, as I know what I need and want, and with several print on demand companies on the internet, I can get what I want - or give myself what I want...

Still... There is the doubt. Worries. Fear gnawing at my confidence and courage.
What if what I do isn't good?
What if it's not good enough?
What if... what if no-one else likes what I do?
I should be able to create something other people like, so I could get a little bit more income, to be able to afford what I want? What if no-one wants to buy my designs, and... If it doesn't generate income, it's useless, worthless, in vain...

And - at the same time I KNOW I'm good enough. I KNOW I like what I do. I would buy it. Spoonflower was created to give people the possibility to get the fabrics they wanted but didn't exist.

A couple of hours later:
Grr... I just can't get it to work! Something, somewhere is crooked enough to make the pattern not repeat properly! Dang!

Later that night:
A second effort to get it right. This time I actually straightened my spoon up and made it more symmetrical, so it was easier to work with. And I followed my husband's advice, and made the pattern in a grid, and I also checked that the horizontal line was straight, but for some weird reason I didn't bother checking the vertical line! And it wasn't... two pixels off. :-Z
Bah.
I'll continue tomorrow. New day, new effort. Even if I'll be late for the contest, I'll be able to produce my first pattern to Spoonflower and it is good.

Day after: This is it: 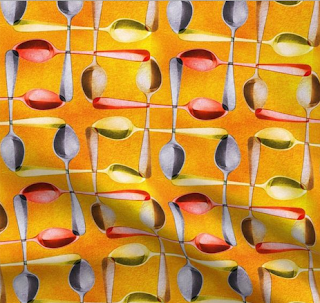