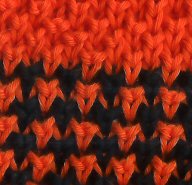 The Italian "two-colored honeycomb", which I thought might not even be named "honeycomb" in English, IS named "honeycomb" in English... It's "honeycomb brioche". The very same stitch the "Uniscarfity" was stitched with... Guess who feels pretty stupid right now. And p'd off. And a couple of other things. The Italian version is SO MUCH EASIER way to do it. No slip stitches and weird instructions - which I suspect are not quite correct either, as I couldn't get it right even after several tries.

Here's another pattern of honeycomb brioche - with "correct" knitting language. It looks the same to me.

abbreviations... K 1 B= k into stitch below next stitch to be knitted.

This stitch pattern is from "Dancin' Needles"

It is unnecessary complicated, I think. 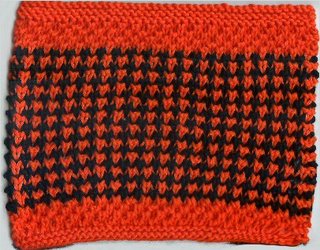 Thanks so much for this - makes everything about 300 times easier!! :)

I made something with "your" pattern and it was wonderful. I particularly like the fourth sample, but do not know how to do it. Can you tell me please?

Thank you :-)
The fourth sample, that's mitered :-)Here's an explanation: http://luannsloosethreads.blogspot.se/p/knit-mitered-square-sock-blanket.html I just changed color every 2 rows, to get it nicely striped. :-)