I have run into problems... 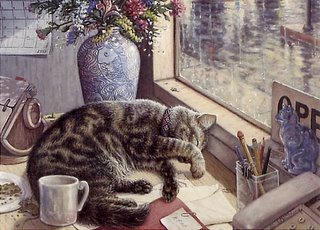 I was supposed to get some more money today, but there's none... so I cannot finish my cat swap package - which was supposed to be done already 25th of May... and this time planning and extra time isn't going to be benefitial... *sigh* I am late already as it is because I was sick, and I did some other things first... I SHOULD have done the cat swap package first, because the Color*iffic package for June could have waited. (At least I know that it has arrived and it was ok :-) Pheeew!)
I was a bit overambitious with this package... I knitted a nice scarf with "rabbit tracks", because I think they look like cat paw marks as well - and it took more time than I had anticipated... simply because I find knitting the same old, same old over and over again EXTREMELY BORING!!! It's very pretty, but... YAWN!!!! So I used every possible opportunity to do something else ;-) I had also planned on dyeing it, but - not going to happen.

I had also planned a box covered with fabric, with 9 compartments - but there simply was no time, so I whipped up something else. It's very nice too... The thing is that I'm right now thinking that it doesn't matter if it is 9 items and if they are purple and yellow, the main thing is that my swap pal gets her package!

It is interesting how the "forced" changes in timetable effects me this much... I was sick for only two weeks, but the thing just keeps dragging and dragging and gets later and later all the time! It really starts to feel like my May swap gets where it's going at the same time as my June swap...
Posted by Ketutar at 2:01 PM